Despite having two massively long straights and plenty of slow corners, overtaking has always been a tough ask in Abu Dhabi – just as we saw this weekend when the DRS failed and even Valtteri Bottas was finding it hard to pass midfield cars.

There are a number of reasons why this happens. The twisty final sector spreads out the cars, the large number of off-camber corners make many of the corners very much single-file, all the slow corners and traction zones mean that drivers have to heavily manage their tyres to prevent overheating.

However, the track does have a few other layouts at its disposal – would using one of those be a better option? Let’s take a trip down fantasy lane and have a look at the pros and cons of each.

This layout uses with the first half of the lap, carrying on until Turn 8 at the end of the first back straight as normal. Then, instead of turning right on the second back straight, the circuit hangs a left before a fast flick right brings you back onto the pit straight.

Pros
Not having the slow twisty section should help keep the pack closer together, and the short 3.13km layout would mean a 99 lap race – which means plenty of chances for drivers to pass. It’d also mean lap times of well under a minute, which would make it a truly unique race, and the faster run onto the pit straight might make Turn 1 more of an overtaking opportunity – especially if it became a DRS zone.

Cons
Unfortunately, such a short lap would mean loads of traffic. The leaders would constantly be separated by lapped cars, and midfield battles would be affected by drivers constantly having to obey the blue flags. Also, the organisers probably wouldn’t like the fact that the flashy bits – like the marina and the colour-changing hotel – are no longer near the actual race track, which probably makes the race a much harder sell for the people who are more concerned with being entertained by the facilities than they are the racing.

Utilising the other half of the circuit, the South Layout would see the start-finish straight moved to the second back straight (which is used as the support race pit lane during F1 weekends), and the left-right-left at the end of it becoming the first three corners. The track then goes through the slow twisty bits, under the hotel and then goes straight on at what is usually Turn 20 to rejoin the back straight.

Pros
The marina and the hotel remain part of the track, allowing the Abu Dhabi GP to retain the aspects which give it its unique character.

Cons
Everything else. At just 2.36km its an even shorter layout than the North circuit, making the traffic issue even worse, and it also uses the bit of the track which arguably hurts the racing on the full layout the most – the slow, twisty bit. Yes, there is the reasonably long straight, but in this guise it’s actually slightly shorter than it is on the full layout, so overtaking would be even harder.

Yes, Yas Marina does have a layout so-called because of a series of corners which apparently mimic the famous Corkscrew at Laguna Seca. Turning left after Turn 3, the circuit plummets through a downhill S-bend (not quite as steeply as at Laguna Seca) before rejoining the lap about a third of the way along the first back straight and continuing on as normal. It effectively just cuts out the Turn 6 hairpin at the far end of the track.

Pros
The first few corners are arguably the best bit of Yas Marina as it is; the corkscrew section effectively continues the theme of fast, sweeping corners, as well as adding a more noticeable bit of elevation change.

Cons
Unfortunately, it significantly shortens the longest straight on the circuit, which reduces the overtaking opportunities over the normal layout. Mind you, they’re not exactly high to begin with, so it’s a choice of whether you think that having a more interesting set of corners offsets the chance that it would make overtaking even harder.

OK, so it’s not technically a real layout, but you could theoretically drive the Abu Dhabi circuit in the opposite direction. After all, who hasn’t gone the wrong way on a racing game just to see what the track looks like in reverse?

Pros
The longest straight on the circuit now goes into the hairpin, which instantly looks like a better overtaking opportunity than anywhere on the normal layout. Also, the pit entry suddenly becomes much more interesting as drivers will have to yeet it through the tunnel at high speed before hitting the speed limiter, which has the potential for madness.

Cons
Obviously the run-offs, marshal posts and safety barriers were designed with the circuit being run in its normal direction and would suddenly become ineffective with the track going backwards. Also, the twisty bit would become the first sector, which would likely have the effect of spreading the field out even further on the opening lap.

Yeah, you caught us, we’re being silly. The World Rallycross Championship used a layout focused around the Turn 7 hairpin, with a dirt section in the infield and even a jump.

Pros
The enormous kerb at the first chicane would be a real challenge, and having a race where drivers have to master gravel, a jump, and a joker lap would be a new way to really test the skill of the drivers strategy of the teams, and the robustness of the cars.

Of course, there are a few other ways the track could be used differently. For instance, getting rid of the Turn 5 and 6 chicane might 1) make the hairpin a better passing opportunity, and 2) make it easier for drivers to get a run down the back straight.

Or, if you wanted to put in the hard work, you could always redesign some of the problem areas of the circuit – maybe remove the Turn 8 and 9 chicane to make one epically long back straight, or change the camber of some of the corners so that they’re a bit less clumsy.

How would you improve the racing at Yas Marina? Let us know in the comments (and no, you can’t just say ‘race somewhere else’). 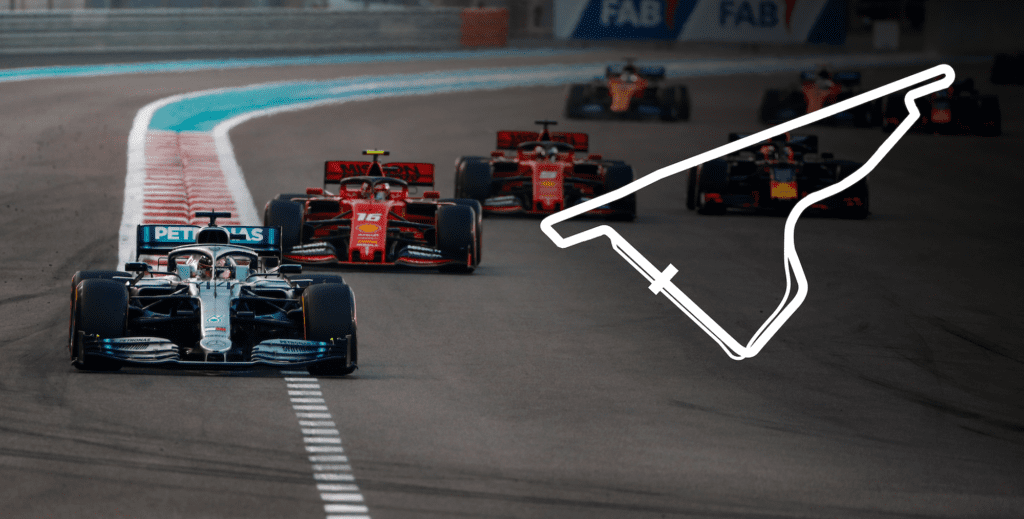